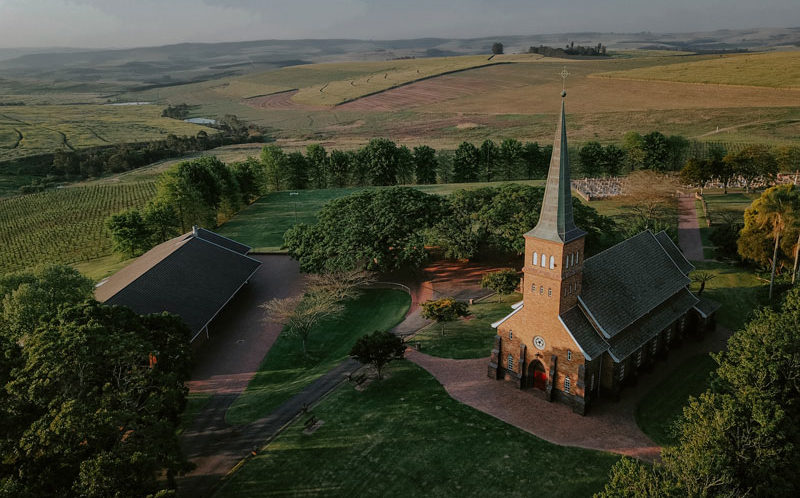 In 1854, as a result of the Hermannsburg Mission and some settlement initiatives, Germans first moved to what was then Natal, and probably in the 1870s to what is now the village of Wartburg, South Africa, and settled as farmers. The road to the mother church in New Hanover (founded 1858) was quite far for them. For this reason, they asked to be cared for locally by church and school. At first they were still being served by Pastor Struve from New Hanover, but soon they wanted to appoint their own pastor and found their own school. There were 19 families who founded the Evangelical Lutheran Congregation of Christ in Kirchdorf on February 28, 1881, built their own church, rectory and school and called the young Hermannsburg missionary Gustav Stielau as their pastor on December 7, 1882. After his installation on February 9, 1883, he served the German congregation of Kirchdorf and at the same time worked in the area as a missionary among Zulus. From the beginning, he also served as a school teacher among Zulus and Germans. Soon the number of the German congregation doubled, and a considerable black congregation was established.

Because the German congregation of Kirchdorf grew from year to year, the church was expanded in 1921 to provide enough space for the members. After 44 years of service, Pastor Stielau retired in 1926. He was followed by Pastor Herbert Graustein, who unfortunately had to return to Germany after only a few years due to health reasons. At the end of 1931, the Mission of Evangelical Lutheran Free Churches, the Mission of the Free Church of Hanover, announced that candidate Ludwig Wiesinger from Gistenbeck in Germany was available for calling. After studying languages in Ventersdorp, South Africa, the congregation called him to be their shepherd on November 10, 1931. Until August 1974, Pastor Wiesinger was allowed to serve the congregation of Kirchdorf.

Because the old church was damaged by termites and dilapidated and had already become too small, people began to collect money for a new church building in 1935. After the war in 1945, the collection of money for the church became serious, and in 1950 a cost estimate was accepted for the construction of a church with building plans for 380 seats with a gallery for the organ and another 60 seats. The organ (G. Steinmann), bell, Corpus Christi and antependia were ordered from Germany, and the church construction was started in 1951. On June 27, 1952 the beautiful church, built in the neo-Gothic style, was inaugurated.

At the end of 1939, Pastor Wiesinger already began to serve some members of the congregation in Durban and the surrounding area. The work blossomed. More and more often Pastor Wiesinger celebrated services there, until the synod finally bought a house in Rossburgh, where a congregation was constituted in 1963 and appointed its own pastor. In 1975 this congregation moved to Westville, a suburb of Durban.

After Pastor Wiesinger announced his intention to retire in mid-1973 after a long period of service in the congregation, the missionary leadership in Germany released Vicar Peter Ahlers from Amelinghausen, Germany, for service in the FELSISA. On March 17th, 1974 he was unanimously called by the Congregation of Christ in Kirchdorf. Meanwhile, the congregation had almost 460 members.

Over the years, the church life has been shaped by an emphasis on scriptural preaching and faithfulness to the Lutheran confession. The brass-band has been active in the congregation since 1885; a choir was also founded in the early years of the congregation, a male choir soon followed, and to this day these choirs enrich and accompany the services and congregational life and contribute to the praise and thanksgiving to God the Lord.

After Pastor Wiesinger had started to celebrate church services in the town of Pietermaritzburg in 1966, Pastor Ahlers continued this work. Gradually, this also led to the foundation of an independent congregation – in 1990, the Immanuel congregation of the FELSISA was founded in Pietermaritzburg.

In the mid-1990s, the Kirchdorf congregation began to gather an English-speaking group, from which the Our Saviour congregation in Wartburg emerged. Soon afterwards, own pastors were called for this congregation. In 1993, after Pastor Ahlers was sent to Pretoria by the FELSISA, the Congregation of Christ, Kirchdorf called Pastor Siegfried Köhne as their pastor. He served the congregation faithfully until his retirement in 2011. Pastor Michael Ahlers, son of Pastor Peter Ahlers, followed him as pastor. After Pastor Michael Ahlers switched to the ministry of the German sister church in 2018, the Kirchdorf congregation was served by Pastor Christoph Johannes as a vacancy representative until the end of 2019. In the same year, the congregation called Dr. Karl Böhmer as its pastor, who began his ministry at the beginning of 2020 and has served as its pastor ever since.

The pastors of the Congregation of Christ in Kirchdorf at a glance:

In 2018, the old organ, which had become difficult to repair, was replaced and the gallery was extended. Today, the Congregation of Christ in Kirchdorf has around 290 members. It is still characterized by a lively congregational life. In the church services, Jesus Christ is proclaimed as the only way to eternal life. Its main focuses are the weekly confessional, main and teaching services with the administering of the sacraments, festive liturgical forms, lively fellowship, daily children’s instruction, the three church choirs, a committed women’s league and an active youth group. The congregation participates in the management of a nearby home for the elderly and supports the school work in the area. It contributes to charitable projects in solidarity with the community and is still connected with its daughter communities.