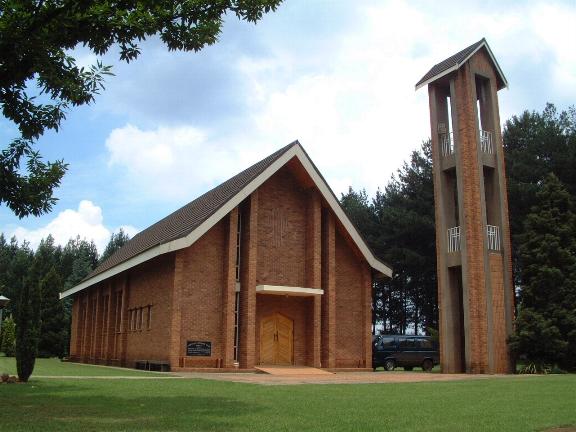 In the beginning of the 20th century a few members of the Ev-Luth Church in Wittenberg moved to the Panbult area half-way between Piet Retief and Ermelo in Mpumalanga to acquire farms. Since their mother-congregation was too far away to regularly attend worship services in Wittenberg, these farmers gathered in one of their homes on Sundays to attend their own lectionary services. The pastor from Wittenberg travelled to Panbult once every three months to administer Holy Communion and other pastoral duties. In 1925 a small chapel was eventually completed an was inaugurated in August 1925 by Pastor J. Schnackenberg built. The ministry in Panbult was then continued by Pastor C. Johannes until 1938. In the following years various Pastors served this daughter congregation of the church in Wittenberg on a part-time base. On 4. December 1955 a new church building was inaugurated on the present premises near Panbult station. This church became the church hall when a bigger church was built and inaugurated by Pastor W. Krause in December 1977. In August 1978 it was decided that three congregations from Vryheid, Newcastle and Panbult should join to become one single ministry that would be sponsored by Synod and be jointly served by Pastor S. Köhne until November 1985, when Pastor J. Schulz was called. When it was decided that the pastor serving Vryheid, Newcastle and Panbult should reside in Panbult, a parsonage was subsequently built and completed by 1989. However, Pastor Schulz unexpectedly passed away in April 1988.

The congregation decided in August 1990 to become an independent and self-sufficient congregation of the FELSISA. In June 1990, Pastor L. Engelbrecht was ordained and became the resident pastor in Panbult until 1993. Pastor G. Scharlach continued to serve the Panbult congregation whilst residing in Wittenberg until 2002, when Pastor Rüdiger Gevers was called to serve and reside in Panbult. When Pastor Gevers followed a calling to Vryheid in 2012, the congregation called Pastor Matthias Albers, who has served the Lutheran Church in Panbult since July 2012.