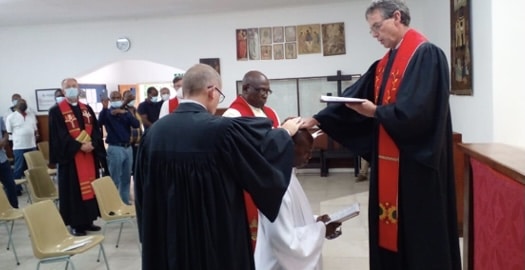 Let me introduce to you Pastor Mintesinot Birru Hanfato, who was recently ordained to help with serving the Diepkloof Congregation in Johannesburg. He is a married man. His wife is still in Ethiopia, but he hopes to bring them to South Africa soon.

He graduated with B.Th. (1998-2002) from Mekane Yesus Seminary, and got his M.Div. in 2009 from the Ethiopian Graduate School of Theology. He served as a youth ministry leader, synod youth ministry secretary, synod Gospel, and Mission department director, Bible translator, comprehensive project manager, and lecturer at different Bible schools and colleges. He joined the LTS, coordinating distance education which was coming from Mekane Yesus Seminary and giving tutorials for distance education learners at LTS since 2015. He serves as a librarian and lecturer at LTS since 2018. In 2020, he registered with UNISA for his Ph.D. study.

In February 2021 Mintesinot was tested before a colloquium, facilitated by the Theological Commission of the FELSISA, and received a recommendation to be used as a teacher at the LTS.

On the 20th of February 2022, Mintesinot was ordained by Bishop Reinstorf (FELSISA). Pastor Christoph Weber, chairman of the MLC and Bishop Maragelo (LCSA) assisted. He was ordained to help with serving the DELC, the Diepkloof congregation in Johannesburg, after Pastor Mabe has fallen asleep in Christ. May he rest in peace.

Since his ordination, he immediately started serving on one Sunday per month at DELC. I can report that both preachers and congregations are appreciating each other.

During Mintesinot’s earlier colloquium he was also tested on FELSISA history and there he remarked on the fact that the missionaries under Louis Harms were initially sent to Ethiopia, his home country. They couldn’t enter at the time because of resistance from the Muslim government. On their way back they stopped at the Durban harbour and there a local missionary encouraged them to stay in South Africa to help with the mission amongst the Zulu people. That is how the work of the Hermannsburg mission was begun and settled at its first mission station in Hermannsburg, KZN. That the mission in Ethiopia happened nevertheless, we can now experience it very closely since God has sent us a helper from Ethiopia to help us to continue the mission in South Africa and also to train pastors at the LTS for other parts of Africa. We are thankful for God’s great provision!