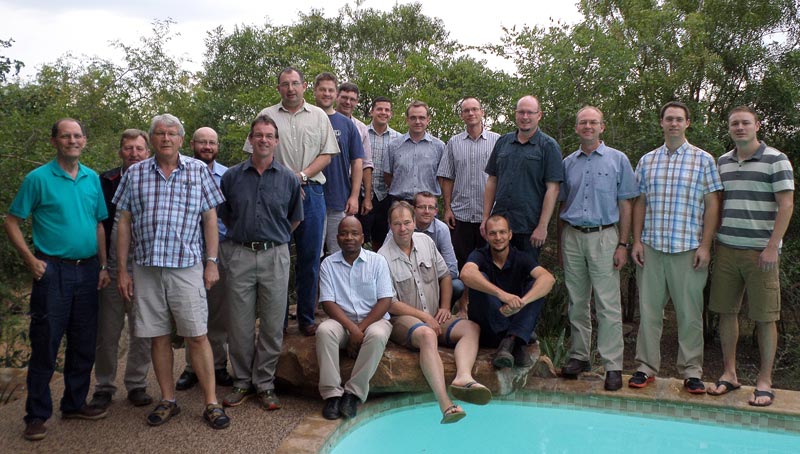 This year the pastors of the FELSISA were privileged to be able to hold their annual convention at the lovely Sitilo game farm on the outskirts of Pongola, KwaZulu-Natal.

Most pastors having arrived on Sunday afternoon and evening, they enjoyed a first Braai in a very relaxed atmosphere around the campfire. Official proceedings began on Monday late morning. After a welcoming by Bishop Dieter Reinstorf, Pastor Martin Paul led the Pastors through an exegesis of the upcoming Sunday’s sermon text. After this, Pastor Jacob Corzine gave a presentation regarding how best to deal with left-over consecrated elements after the celebration of the Lord’s Supper, so as to allow certainty to grow in believers as to Christ’s real presence in the Sacrament. The afternoon was filled with a report by Pastor Rüdiger Gevers on his congregation as well as the opportunity for a game drive.

On Tuesday the main topics on the agenda were a presentation by Pastor Kurt Schnackenberg on hermeneutics in conjunction with talks currently taking place with the Evangelical Lutheran Church in Southern Africa (N-T), a presentation by Pastor Dieter Schnackenberg on the doctrine of the Church according to St Paul’s letter to the Ephesians, as well as a report by Pastor Heinz Hiestermann on the congregation he serves.

The last full day of deliberations was Wednesday. After a divine service led by Pastor Helmut Straeuli, diverse topics were discussed. These included an update on current mission projects, preparations for the synodical convention, a progress report on the revision of the English Order of Service and the drafting of a conscientious objection to the termination of pregnancy for medical doctors. The last words were afforded to Pastor Nathan Mntambo, who reported on his work in his congregation.

Special thanks go to the Gerken Family for allowing us use of their game farm for the convention! A hearty thank you also to Pastor Matthias Albers for planning and organizing all meals, and of course to Bishop Reinstorf for leading us through the agenda and allowing for a convention held in the spirit of mutual respect and brotherly love.