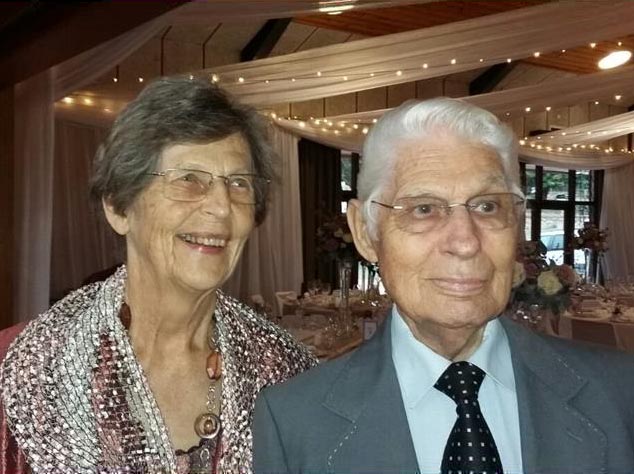 On the 31st August 2016 Pastor Günter Scharlach, the long-time pastor of the Peter-Paul’s Congregation in Lüneburg and former President of the Free Evangelical Lutheran Synod in South Africa, passed away at the age of 90.

He was buried on the 3rd September in Kirchdorf, escorted to his final resting place by almost all the FELSISA pastors as well as some pastors from the LCSA.

Günter Friedrich Scharlach was born on the 1st November 1925 in Bochum, Germany. He was the second son of Josef and Alma Scharlach, and was baptised on the 29th November in the name of the Triune God. During the time of his confirmation classes, the Second World War broke out in 1939. God’s promise, given to Günter in his confirmation verse from Isaiah 40:31, “Those who hope in the Lord will renew their strength” became reality for him in the following years: 1942 he became a soldier, fighting on the front line; he was wounded three times and was ultimately taken captive. His older brother Werner was killed during the war.

After the war, he attended the Technical College in Hattingen with the aim of becoming an electrical engineer. But he broke off his studies and enrolled at the Mission Seminary in Bleckmar in 1948, where he studied theology for seven years. During this time he also studied in Oberursel and Hamburg. He served as vicar in Dreihausen (Hesse) under Pastor Adolf Heicke.

In 1955 Günter Scharlach said farewell to Germany, something that didn’t come easily to him. His hometown congregation sent him on his way with the verse from Acts 4:20, “For we cannot help speaking about what we have seen and heard.” Shortly before Christmas 1955, he arrived in South Africa together with the Missionaries Siegfried Damaske, Georg Schulz and Johannes Junker. In January 1956 he was called as pastor of the Lüneburg congregation. Up to the time of his ordination on the Sunday Quasimodogeniti in 1956, he served as vicar in Kirchdorf under Pastor Wiesinger. There he met his wife Ingrid (née Ringelmann). They were married in February 1958. The marriage was blessed with ten children, three of whom were called to their heavenly home before him. His parents immigrated to South Africa in 1960 to live with their son and his family in Lüneburg.

In 1962 Günter Scharlach was elected onto the Synodical Council, and soon after also onto the Mission Council. In 1966 he became Vice-President, and in 1971 President of the FELSISA. His term of office as pastor and president was characterised by his clear subscription to Holy Scripture and the Lutheran Confessions, and the resulting rejection of all false unionism and church relations. This he emphasised in his synodical reports to the Synodical Conventions time and time again, leading and showing the way forward in all clarity. A report about his time as President of the FELSISA can be found in one of the previous editions of the FELSISA Witness (02/2016).

As a personal note, I’d like to add that I was his first vicar in 1974, and that, from 1982, I had the privilege of working with Günter Scharlach on the Synodical Council for eight years.

Günter Scharlach served as pastor and president up to his retirement in 1990. But retiring was not for him. With ample joy, and mindful of the Word from Isaiah “Here I am Lord, send me,” he served, amongst others, in the congregation of Wittenberg, in Panbult for twelve years, as well as assisting his son-in-law Wilhelm Weber in Wittenberg as assistant Pastor until 2002. After that he regularly held services in Newcastle and Vryheid, until he and his wife moved to Wartburg in 2006 – where he preached in Kirchdorf on a monthly basis. Preaching, teaching, chairing meetings, visiting members… these defined most of his life.

During the last years, Günter Scharlach wrote down his memoirs, which were published in a number of congregational newsletters. After celebrating his 90th birthday last year, and his 60th ordination jubilee this year, all in good health, Günter Scharlach passed away peacefully after a short illness in the early hours of the 31st August 2016.

We thank the Triune God for this His servant, who – called into His service – tirelessly did, what he was called to do: to preach the Word of forgiveness, to forgive sins, and to administer the Sacraments. In doing this he purposefully followed the will of God, and would not by swayed or led away from this by anything or anyone.

(Based on the obituary provided by the Scharlach Family)