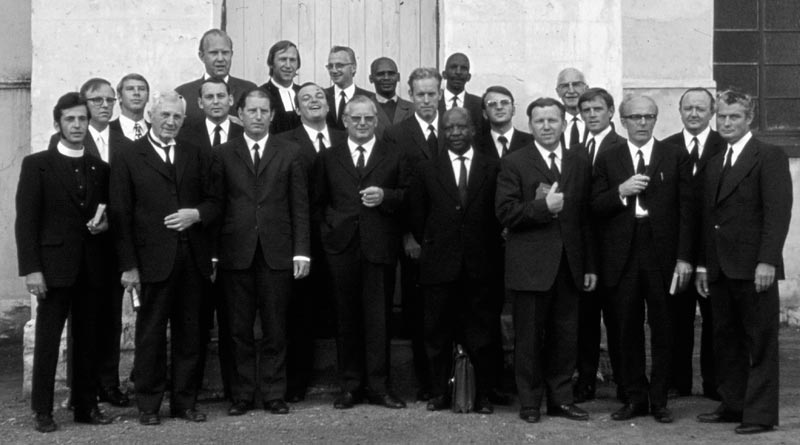 The timespan into which the term of office of President Günter Scharlach falls, was furthermore a time of many expansion activities: In 1972 the Durban congregation got the go ahead for purchasing a new property in the suburb of Westville, and received additional financial assistance for erecting its church building, and the Shelly Beach congregation received a further grant for building its parsonage (1972). Synod gave its consent for another pastor to be called for the purpose of the expansion work, and the Johannesburg congregation purchased a new property in Fairland (1974). In Newcastle a property was bought, and with the help of a special collection, a parsonage built (1980); the Pretoria congregation launched a branch in Kempton Park (1976), which became a synodical branch in 1978. In the church report to the 1976 Synodical Convention it was mentioned that the Panbult congregation had concrete plans for building a church. In 1978 the congregation in Vryheid became a branch of Synod and a pastor was employed for it, together with the congregations in Newcastle and Panbult.

In 1982 the independence of the congregations in Pretoria and Johannesburg could be announced, and in 1990 the establishment of a synodical branch in Pietermaritzburg. In Randburg, Johannesburg the “South African Lutheran Mission Society” (SALMS) was founded by private initiative, which sought to proclaim the Gospel in the English language, initially with the help of retired pastors from Canada and the USA. In 1990 SALMS could inform Synod that divine services were being held in the congregation of the “English Lutheran Fellowship” in Randburg, which later called its first full-time pastor in 2001.

To support the FELSISA congregations in its expansion efforts, an Office for Church Growth was instituted in 1988.

At the Synodical Conventions during this time, motions for special collections, new loans for young congregations, or release from synodical levies were constantly being proposed.

An Emergency Community, which was established in the Hermannsburg Evangelical Lutheran Synod as a result of the deep concern regarding the course of this church, led to the founding of the “Evangelical Lutheran Confession Congregation in South Africa” in Greytown on 8th December 1973. The congregation asked the FELSISA to provide spiritual care, and after a short time of affiliation was fully accepted by it in 1974.

After the idea of operating an own theological training facility had been mentioned for the first time at the Synodical Convention of 1974, a lengthy memorandum about such an institution was presented to the next convention, with the result that ‘further thorough consultations’ should take place. In 1978 that was supplemented with the directive ‘that the Synodical Council together with Mission and Lukisa [LCSA – Lutheran Church in Southern Africa] should undertake the necessary studies.’ In 1980 the Synodical Convention resolved to start a seminary.

Thereupon in February 1981 the FELSISA began its own in-house training of its future pastors in Pretoria at the Lutheran Theological Seminary (LTS). Vice-President Ernst-August Albers und missionary Dr Friedrich Dierks were called as lecturers. Two houses for the lecturers were purchased, which bordered directly onto the church property of the Pretoria congregation, in whose buildings the seminary was located.

Right from the beginning of its planning phase, the LTS was envisaged as a joint seminary with the Lutheran Church in Southern Africa (LCSA), which had its seminary at Enhlanhleni near Pomeroy in Natal. For a number of reasons this could “for the present”1 not be realised. Therefore the Synodical Convention of 1988 emphasized again to strive for a joint seminary. But in 1990’s Synod Report, the convention was informed that although a statute of foundation for a joint seminary had been drawn up, the “demands and expectations of a joint seminary differentiated that much, that it would hardly occur in the foreseeable future.”2

As a consequence of the dissolution of church fellowship between the Wisconsin Evangelical Lutheran Synod (WELS) and the Lutheran Church – Missouri Synod (LCMS) (both in the USA) in the 1960s, the WELS also questioned its fellowship with the FELSISA, as the latter was in a so-called triangular affiliation via the Independent Evangelical Lutheran Church in Germany (SELK), thereby indirectly connected to the LCMS. On invitation of the WELS, the then existing joint doctrinal commission of the FELSISA (President G. Scharlach, Vice-President E.A. Albers and Rev. P. Ahlers) and the Lutheran Church in Southern Africa (LCSA) (Bishop G. Schulz and Dr W. Weber) travelled to Milwaukee, USA in September 1985. There the topics of Church Fellowship and Triangular Affiliation were intensively discussed with the WELS Commission on Doctrine and Fellowship.

As result of the four days long negotiations, the commission of the WELS informed the South African representatives, that while it found nothing wrong with the doctrine of FELSISA and LCSA, it could however not continue the fellowship with them because of their indirect connection with the LCMS. At the same time it was suggested that the existing connections be maintained between the churches on a personal level. Two years later the Synodical Convention of the WELS officially cancelled the church fellowship.

The offer to maintain a relationship on a personal level, was made use of by three or four later visits to the WELS by LCSA Bishop G. Schulz, and President P. Ahlers and Vice-President S. Köhne of the FELSISA, whenever the opportunity arose, without being able to bring about any changes in the official relationship with the WELS.

Church Fellowship with Lutheran Free Churches in Finland and Denmark

At the 1984 Synodical Convention, President Scharlach reported on his visits with the Lutheran Free Churches in Finland and Denmark, at which the matter of church fellowship was also discussed. Thereupon the convention resolved to officially recognise such fellowship with both sister churches.

Mission in the Johannesburg Area

At a meeting with the Mission Council in Germany, the suggestion was made of doing mission work in the Johannesburg area together with the Independent Evangelical Lutheran Church in Germany (SELK). The 1984 Synodical Convention of FELSISA approved of this in principle. The work was started soon afterwards, but was given up after a couple of years.

In 1980 President Scharlach informed the Synodical Convention, that the negotiations with the Hermannsburg Evangelical Lutheran Synod had been terminated, as with its merger with the Transvaal Church to form the Evangelical Lutheran Church in South Africa – N-T, a new situation has arisen.3

As the existing pension regulations for pastors were completely inadequate, new rules were accepted in 1984. To cover the substantial deficit, a significant collection was held throughout the congregations of Synod.

As President G. Scharlach would reach retirement age soon, the Synodical Convention of 1990 elected Vice-President E. A. Albers as president of the FELSISA.