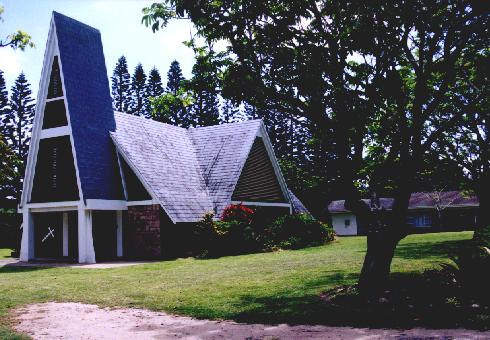 The history of our parish takes us back to the year 1883, when the families Albers, Voigts, W. Backeberg, Froehling and Stuke settled on the South Coast. They were settlers who had emigrated from Germany. On arrival, it was only natural that they should contact Pastor Peter Stoppel, who, prior to the arrival of these new immigrants had taken up residence on the Marburg Mission Station. Pastor Stoppel accepted the call of a growing number of settlers to become their pastor. In this position he found himself at variance with his superiors and left Marburg to settle in the vicinity of Izotsha, giving his new residence the name “Marburg – Umhlangeni”. From this vantage point, he served the small community as their pastor. This takes us back to the year 1883.

The first church building was destroyed

The newly founded congregation decided to build a church, and indeed, on the 26th of April 1891 a church was dedicated. For three years the settlers gathered at Umhlangeni for divine worship. Then tragedy struck. On’ the 24th of December a tornado completely obliterated the church building. This was a heavy blow for the congregation. Added to this there was the aggravating circumstance, that the congregation owed allegiance to the person of Pastor Stoppel. What transpired to induce Pastor Stoppel and the congregation to seek affiliation with the Free Evangelical Lutheran Synod in South Africa (FELSISA) I could not ascertain. Nevertheless, such affiliation was effected in the year 1899.

In the following year 1900 St. John‘s Parish could dedicate a new church building on the 7th of February. This building served both white and black parishioners. Thus, Pastor Stoppel enjoyed the privilege of witnessing the erection of a new church building. That same year, on the 3rd of July 1900, he passed away. The church still stands today, a visible monument to the first settlers during those trying times.

On the 12th of January 1901 the new pastor, Rev. Johannes Schroeder, was installed. He, however, left the coast on the lst of September that same year as the climate did not agree with his health. He was replaced by Pastor Karl Meister that same month, who also served the black and the white community.

The majority of white members lived in and around Paddock, and according to statistics the highest figure achieved as regards membership is 67. In the church register – which is the identical register used by St. John’s Lutheran Parish today – the following names are listed in the baptismal register of 1903 – 1947:

The years 1901 – 1919 were turbulent and even sad times for the congregation. By majority vote, it was decided to establish the centre of parish activities in Paddock. Messieurs H. and W. Bunge had provided a building site on the farm Konstadt, where a manse and a hall were built. This new parish centre was dedicated on the 30th of November 1902.

Thus, Umhlangeni (formerly Marburg- Umhlangeni) was without a pastor and was visited by the resident pastor in Paddock every fortnight. Membership at the time stood at 44 souls. Because of problems in the parish, Pastor Meister was re-called by the Mission in 1905, and returned to Umhlangeni, from which place he served both black and white members until the year 1919. On the 3lst of December 1919 Pastor Meister was transferred to the Pella Mission Station near Wartburg.

In January 1920 Rev. Martin Friedrich Schwacke filled the vacancy. During the long period from 1920 to 1947 the congregation never really recovered from the upheavals of the pre-war years. Membership declined rapidly and the last entries in the baptismal register are the names Theodor and Konrad Schiel. Pastor Martin Schwacke passed away on the 20th of October 1951. His son, author of this report, was installed as Missionary at Umhlangeni in the year 1953. There were no longer any white members.

New group forms in the house of Oellermanns

After years of dormancy as a parish with white members, new life came to light, after Mr. Höfler asked Pastor Schwacke that he ofﬁciate at the marriage of Mr. Höfler to Rosalie Rostrin. At the instigation of this young couple, devotions were held in the home of Mr. Stillfried and Mrs. Henriette Oellermann at Sea Park on a fortnightly basis. The first devotion was held in their home on Easter Morning 1963 and from then onwards until 1967 every fortnight. A new congregation was gathering.

The last baptismal candidates in the old baptismal register were the first confirmands in the newly founded congregation. 1965 The FELSISA instructed Rev. E H. Schwacke to serve the English and German-speaking community on the coast in addition to his work amongst the Zulus. The growth of the new congregation is reflected in the figures below:

During this time of growth, the congregation took leave of Sea Park and every Sunday worshipped in the little hall which had in the meantime been built on the extensive grounds donated by the late Mr. and Mrs. Otto von der Ohe. 1967 the new church was dedicated and the nucleus for a church-choir was formed. Since 1975 regular church-choir practice was introduced to enhance all our festive Sundays and other liturgical functions. In 1976 12 members founded our brass ensemble with 17 instruments which were being disposed of 2nd hand by the Commercial High School and were donated by two members of the congregation. The FELSISA now decided to call Rev. E-H. Schwacke on a full-time basis to serve the English and German-speaking community. He was installed on the 29th of October 1972. The hall and the church had by then been completed and in that same year, the manse was built and soon after, the cemetery was established. Since then, 10 years have elapsed. The author of this report and his wife, who for nine years supported his work as the only organist until further players appeared on the scene, live in retirement in Blue Seas Township. “My times are in Thy hands”. (Ps. 31,15). This truth is borne out by all parish activities and the fact, that already we have 22 graves where our dear ones have been laid to rest.

1986 the new pastor, Siegfried Köhne, was installed at St. John’s Lutheran Parish. He is the grandson of Pastor Karl Meister, and his wife is the great-granddaughter of the pioneer family Backeberg of the farm Baven, now known as the sea-side resort Baven-on-Sea. Membership today stands at 181 souls. May God preserve His Holy Word and Sacraments for this and coming generations. (Report of Ernst-Heinrich Schwacke.)

In 1993 Rev. Köhne is called to Kirchdorf and Rev. Eckhardt Schroeder is called from Johannesburg to St. John’s. In 1995 the church hall was enlarged. In 2000 Rev. Schroeder retired. Pastor Charlie Huppe was called from Cape Town in 2000 and served the congregation until he retired in 2004. Then followed a time when no pastor was available to be called and the congregation was served by pastor Helmut Straeuli from Durban. In August 2005 Rev. Kurt Schnackenberg was installed and to this day (2017) remains the pastor of the congregation. (Last part was added by Rev. Kurt Schnackenberg.)