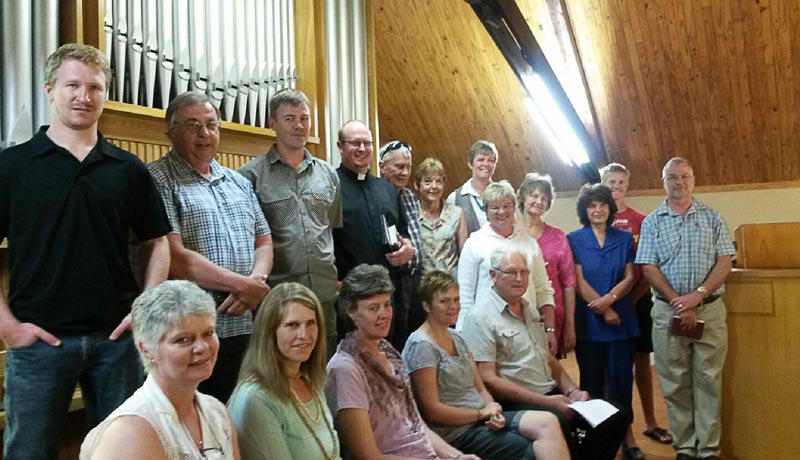 On 14th November 2015, 18 people came together in Panbult for a workshop organised by the Organists Association of the FELSISA.

Pastor Roland Johannes opened the meeting with a Devotion. He explained that in his experience, organists are often “soft targets,” receiving criticism from all sides: they play “too fast, too slow, too loud, too soft, wrong melody… etc. etc.” Whenever organists are plagued by tiredness, frustration, and possibly even resignation because of this constant criticism, they are to be reminded of the fact that they do not and cannot perform their duties out of their own strength and willpower.

It is only when the organist commits his talents to the glory of God and the service of the neighbour that this duty gets its real meaning. The Lord has promised strength and courage for this important service to the congregation – the organists need not lose heart!

Dietrich also gave practical examples of how the different stops of the organ can be used so that the tonal colours, the volume and the tempo reflect the character of the hymn being played. Unfortunately, there are not many suitable short choral preludes available in print. Dietrich did, however, present some compositions by the contemporary French composer Gaël Liardon, which could be of use to the organists in the FELSISA.

After this presentation, the AGM of the Organists Association took place. A decision was taken to publish a book with suitable choral preludes. For every hymn, two preludes will be printed – one more elaborate (like those of Liardon), as well as a second, simpler version. For this project, suitable pieces will now have to be found. The copyright will also have to be sorted out.

The German Liturgy Book for Organists, published and printed by the Organists Association in 2015, was also discussed. In this book, the different Orders of Service, as celebrated in the German congregations of the FELSISA, were printed for use by the organists. (A similar project is in the pipeline for the English Standard Order of Service). The version for the organists corresponds with the Order of Service as printed in the German hymnal – thus the congregation (and especially guests!) can follow proceedings easily. A congregation comes across as welcoming and hospitable when guests are able to follow the Order of Service easily and thus take an active part in proceedings.

Thank you very much to all those congregations who supported the Organists Association financially in the past year. Thank you also to the Panbult congregation for the catering and for the use of their facilities for the annual meeting.

Ernst-Heinrich Johannes (Chairman of the Organists Society of the FELSISA)