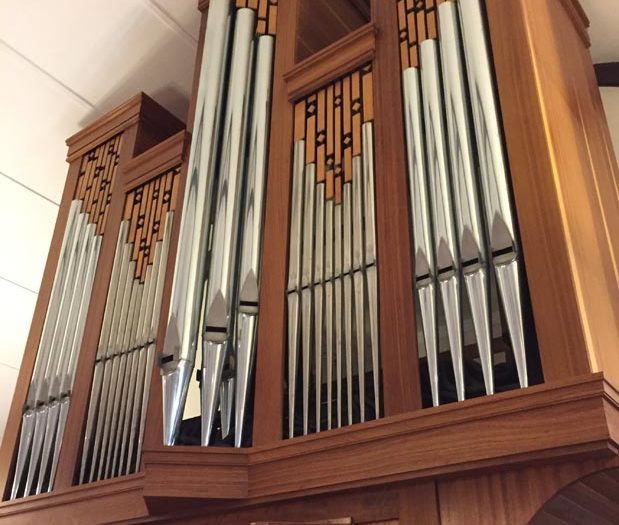 Church music has always played an important role in the Lutheran Church.

All the more significant that two congregations of our synod will receive new pipe organs during this the 500th anniversary of the Reformation. The congregations in Lüneburg and Kirchdorf made the bold move of investing money (lots of it!) for these new instruments, and by these investments demonstrating the high esteem in which church music is held in the Lutheran tradition. Both these instruments are of excellent quality, and will (God willing) be a blessing to generations yet to come. 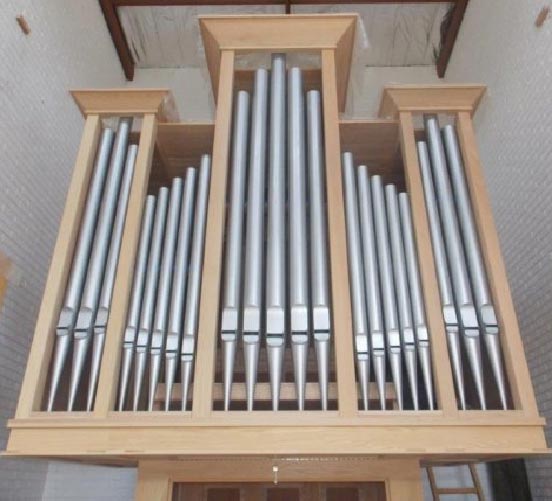 Let’s start with Lüneburg: a couple of years ago, the old organ was struck by lightning. This was fixed, but problems remained, with the organ becoming increasingly unreliable. Over time more and more pipes (and sometimes even entire stops) fell silent, so that the accompaniment of the Divine Service was no longer a given. To replace the electrical components would have cost quite a bit, since the parts needed to be imported from England. Added to this was the problem of limited space for the choir on the organ gallery. Thus the decision was taken to purchase a new tracker-action (i.e. fully mechanical) instrument, custom-made for the church in Lüneburg.

At first, a tonal design with 12 stops was set up. But Lüneburg wanted more – and so a second design with 15 stops was presented. This design is the one being built at the present time in the workshop of the master organ builder Jan Elsenaar of Brandfort (near Bloemfontein). Mr Elsenaar is a specialist for tracker action organs. It was he who built the very successful instrument in the St. Peter’s Congregation in Greytown in 2004.

To save on costs, some of the old pipework is being re-used in the new instrument. These pipes are all of a good quality and will be complemented by 7 new stops, all imported from Holland. The result will be an interesting instrument with many different tonal colours. God willing, the Elsenaar-Organ is to be inaugurated on the 1st Sunday in Advent 2017.

In Kirchdorf things happened rather quickly! The old instrument (built by Steinmann in Germany in the early 1950s – just like the Lüneburg instrument incidentally), was still relatively reliable, even though it was of poor quality. But the local organ builder was retiring, and there would thus no longer be an organ builder in the whole of KwaZulu-Natal to take care of the ageing Kirchdorf instrument. Thus here too there was uncertainty about the future of this instrument, and whether it would continue to be reliable.

Out of the blue, we were amazed to find a beautiful mechanical organ for sale on OLX! The instrument had 18 stops and stood in the NG Church in Verwoerdpark in Alberton, a congregation that had sacrificed the use of the organ in their services for a band about 10 years ago. (Incidentally, this congregation has gotten smaller, not bigger, since then! Food for thought?). The organ was built in 1983 by the famous organ builder Jan Roeleveld, a legend in the South African organ scene. This was the instrument he was always most proud of. Unbelievable that it should now stand in Kirchdorf!

After the instrument was inspected in Alberton in June 2016, the Kirchdorf congregation unanimously decided to put in an offer. From then on everything happened at an amazing tempo! The Alberton congregation wanted to get rid of the organ as quickly as possible, and so Jan Elsenaar, who was also entrusted with this project, started dismantling the organ in January 2017. At the present time it is being erected in Kirchdorf. God willing the inauguration will take place on the 5th March 2017.

The Roeleveld-Organ, a sizeable instrument, fits perfectly onto the gallery in Kirchdorf. In fact there is only 1cm of space above the organ! The instrument looks as though it was designed for this church – the beautiful façade, the fantastic quality of the workmanship, and the incredible sound are a joy to behold!

May these two pipe organs resound to the glory of God for many generations to come! The question is though: Who will play these beautiful instruments? It is hoped that the new instruments will inspire and motivate the younger generation to take up learning to play the pipe organ. The FELSISA Organist’s Association continues to assist in this regard. May our Lord bless this work richly!

Pictures and details of these pipe organs may be found on the webpage of Jan Elsenaar (www.janelsenaar.com) as well as on his Facebook page.