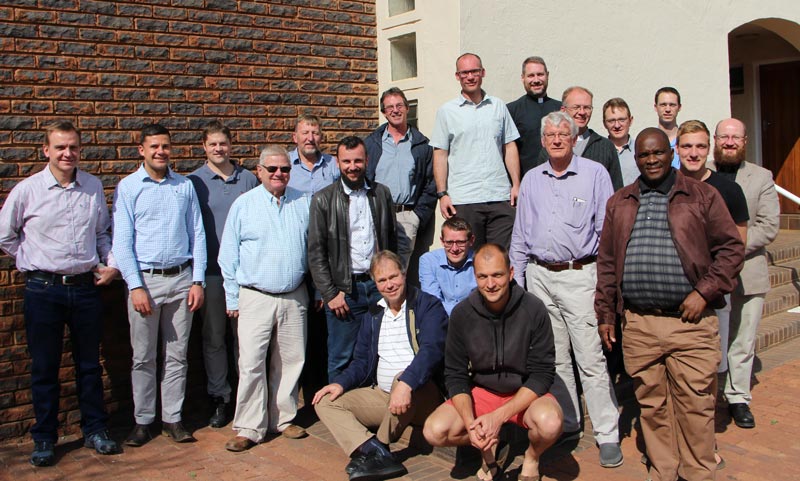 Most FELSISA pastors were able to attend a workshop at the St Paul’s Congregation, Pretoria, held 13-15 August 2018, under the heading “Delivering Pastoral Care and Mobilizing Congregations in Times of Suffering” – a very relevant topic dealing with the current debate of land expropriation.

On Thursday afternoon, Dr Karl Böhmer gave an overview of the current narratives that different groups have concerning land ownership in South Africa. 24 years later, it appears to a large segment of the population that simply too little has been accomplished in undoing the lasting effects of apartheid, especially the forced removals. While the reasons for this are many, and the intricacies very complicated, the fact remains that a significant portion of the population is simply unhappy with the results. This is probably the biggest influence on the current land debate, which often involves more heated emotions and less cold facts.

As Christians, it is vital to properly differentiate between the left and right-hand kingdoms. When dealing with the concepts of private property, land ownership, and governing of the land, we are operating in the left-hand kingdom. What complicates this matter is

that Lutheran and Reformed churches have a different understanding of the two kingdoms, and many political associations operate with a Reformed viewpoint when it comes to the current debate on land.

For this is a gracious thing, when, mindful of God, one endures sorrows while suffering unjustly. 1 Peter 2:19

On Friday, Prof. Dr John Pless from the Concordia Theological Seminary, Fort Wayne (LCMS), spoke about Psalm 37 and its use in comforting anxious and troubled people. Paul Gerhardt’s hymn “Entrust Your Days and Burdens” (LSB 754) draws on Psalm 37 as a whole, and verse 5 in particular. Many of the ‘Lament’ psalms have a threefold pattern: the remembrance of God’s saving acts in times past, the current distress, and finally a look to the future resolving of that hardship which will bring praise with it. Martin Luther commented on Psalm 37 that it brings comfort to those who are impatient on account of the success of the wicked. Their “success” is, however, only according to earthly things, and Luther points out that these do not last. Justice will prevail – even if it takes longer than we would like it to take. God promises that He will enact justice – on His time. And so Luther admonishes the Christian to “Keep your faith, and do not doubt. God will not forsake you. Just do your part, go on working and making a living, and let Him prevail.” (AE 14:212).

Christians do not fight evil with evil, but vengeance will be God’s (see Romans 12, 1 Peter 2). God sometimes even works sub contrario (under His opposite), where evil seems to be winning, and good seems to be losing, where evildoers seem to be prospering, and believers seem to be suffering unjustly. Here, we are to remember that we do not live by sight (and what things seem like), but by hearing and believing what God says. And God promises ultimate justice. Yet Luther is not a naive idealist – he sees reality very clearly. Luther says that while we believe God is in control if you look around, it certainly appears –seems- that a mad axeman has been let loose in the forest (the hiddenness of God). This is part of bearing the Cross, which we are called to do patiently, and even to rejoice in this sharing of Christ’s Cross (Philippians 3:10, 1 Peter 4:13). In this, we are conformed into Christ – becoming Christ-like (Romans 8:29). Even if we can’t understand the mystery of this current suffering, we trust it is for our ultimate good (Romans 8:28).

Never avenge yourselves, but leave it to the wrath of God, for it is written, “Vengeance is mine, I will repay, says the Lord.”  Romans 12:19

During the afternoon session, Rev. Michael Meyer, from LCMS Disaster Relief, talked about the stages of disaster response, from assessing to responding to a disaster, be it natural or man-made: what are the basic necessities that need to be addressed first, like shelter and food, what are the long term goals like rebuilding houses. A large part of disaster management is pre-planning. While this is not a pleasant exercise, being prepared is part of good planning. What if there was a fire sweeping through your area, and you only had 20 minutes to pack some things in the car and flee? What would you take? It’s much better to think through contingency plans before you need them. Does your congregation have emergency plans? Does it have a plan if a member were to collapse in church? What if it’s the pastor? It’s helpful to have a conversation about these things. Even if it probably won’t happen, it’s best to have a plan.

A plan should consist of both what needs to be done to help, and also how you would then realistically implement the plan. What needs to be done immediately (48-hour plan) and what is the long term plan. So if, if, members of a specific congregation have their land expropriated, will other members be able to host them (short term), what could be the plan long term… Another part of preparing is teaching members how to confess their faith in the face of earthly suffering – that they know what to say to affected people (and also what not to say).

As this issue remains at the forefront of most South Africans, it is a topic that will be further explored at the 2018 Synodical Convention and also the Church Councillors’ Meeting in November.

Thank you to the St Paul’s Congregation Pretoria for providing the facilities and especially Renate Straeuli for the delicious catering. A special thank you to Prof. Pless and Rev. Meyer for their presentations, expertise and time, and also for the books and resources they provided.