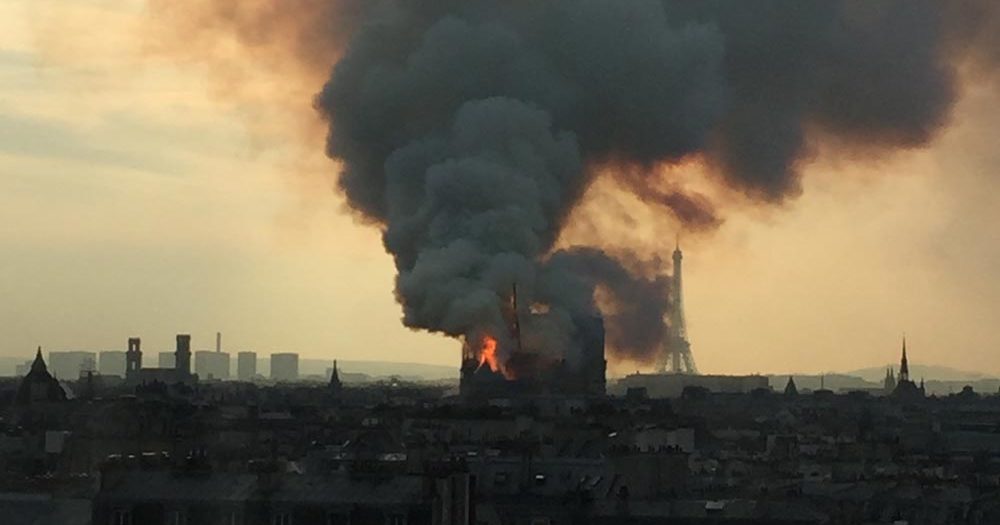 On Monday, 15th April 2019, the Cathedral of Notre Dame in Paris stood in Flames. In his sermon for Good Friday a few days later, Pastor Roland Johannes uses this image to explain what happened on Golgotha.

Near the cross of Jesus stood his mother, his mother’s sister, Mary the wife of Clopas, and Mary Magdalene. When Jesus saw his mother there, and the disciple whom he loved standing nearby, he said to her, “Woman, here is your son,” and to the disciple, “Here is your mother.” From that time on, this disciple took her into his home. (John 19:25-27)

On Monday evening I looked on in shock and dismay as one of the most beautiful and noteworthy cathedrals on earth went up in flames. As someone with a deep interest in Gothic architecture, I was glued to my computer screen as I anxiously followed the events via live streaming. The Cathedral of Notre Dame in Paris is one of the most perfect examples of gothic architecture, and since visiting it for the first time in 1996, the beauty of the place has captivated me ever since.

Monday was a catastrophe. The incredible rose windows, the fine medieval glasswork, the magnificent sculptures, the splendid pipe organ – they were all in danger of being lost forever. It wasn’t looking good as the fire spread in no time, devouring the 800-year-old wooden roof structure, and threatening to bring the vaults crashing down into the church.

What shocked me was the fact that I wasn’t able to look away. Despite the scenes in front of me being painful to watch, I simply could not look away. I couldn’t switch off my computer. I had to see what was happening – until late into the night. I was mesmerised, with emotions of helplessness, sadness, shock, disbelief, and amazement all happening at the same time. 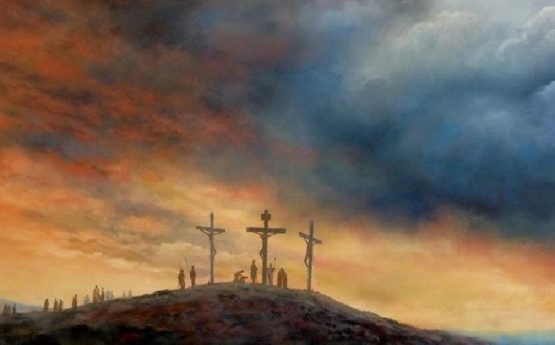 Similar scenes at Golgotha. Now sure, there wasn’t an 800-year-old cathedral on fire! But another temple was being destroyed here. Something far graver, far more notable, far more serious was happening here: The Son of God himself was hanging on a cross, dying the death of a shameful sinner. Being burnt not by fire, but by the wrath of God.

And much like I couldn’t look away on Monday night, here the disciple John, Jesus’s mother Mary, and a few others are also looking on in disbelief. To me, it seems like they also can’t look away. It’s as if they have to see what is happening, even though the scene before their eyes is a painful one.

I picture them standing at a distance, not too close out of fear of the soldiers, but close enough that they can see what is unfolding. I imagine the shame and guilt in John’s mind – just a few hours ago he had run away, together with all the other disciples, leaving Jesus alone to face persecution and ultimately death. (Hats off to him for actually coming to Golgotha, for having the guts to witness these scenes. The other 11 hadn’t even made it this far!)

Standing there, looking on, something amazing happens. John is the only one of the four evangelists to report this. John, Mary, and the other women are standing at a distance, a safe distance one could say. But Jesus sees them. Despite all that is happening, Jesus sees them! And then he shows how incredible the love and care that he has for us poor human beings really is!

You see in ancient times, Mary would now have been defenceless. Her husband Joseph was dead, and as a single woman, she had no legal rights. She needed a man to act as her guardian. Up to now, Jesus had been that man. But he was about to die, and he needed to find a replacement. He wanted to know that she would be taken care of.

You know when I’m in a bad place, I’m usually thinking only about myself. When I’m suffering, it’s all about me. My pain, my loss, my misery, the lack of compassion I receive from others, the lack of attention, the lack of responsiveness to my situation, my bruised ego…

Not so Jesus. In the midst of the worst pain and agony imaginable, he thinks not of himself, but of others. Dear friends, this scene on the cross that John describes to us this morning is such a lovely image of what Jesus is actually doing there in the first place – namely looking out for you, identifying your needs, and taking care of you! We can see here on a small scale what he’s doing for the entire human race! He takes care of his mother and ensures that she is safe. So he does for you too.

Sure, it may sometimes seem as though it’s burning all around you, as if the structures of your life are in danger, as if the vaults are about to come crashing down. Yet Jesus is there, looking out for you, providing for you. He is there, ready to help and provide in your time of need.

In the early hours of Tuesday morning, with the fire more or less under control, one of the Paris firemen ventured inside the cathedral, and he took this picture:

Destruction all around, smouldering piles of rubble, darkness… But in the background, despite it all, the huge golden cross on the altar shines brightly. Despite all that is happening around, the cross is right there, immovable, resolute, steadfast!

Dear friends, no matter how bad the destruction and devastation in your life may be, Christ is there! No matter how small or how big the fire, his cross is immovable. And unlike the Cathedral of Notre Dame, which will take years to rebuild, the temple that is Christ was restored in only three days, just as he had said! Rebuilt and restored in all its glory! And just like Christ was restored, so you too will be restored at the Last Day.

Look to that this morning. Cling to that, no matter what. After all, we call it Good Friday, don’t we? Amen.