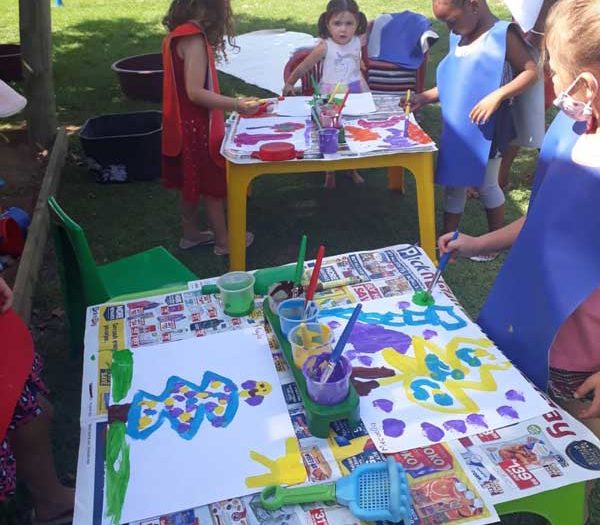 It is a complicated story.

Also at St Martin’s Village. And yet, as many of our certainties shake and cannot be relied upon, we have to concur with Jeremiah, himself no stranger to uncertainty and suffering:

“The steadfast love of the Lord never ceases; his mercies never come to an end; they are new every morning; great is your faithfulness.” (Lamentations 3: 22f.)

We thank God for all of you and all those people He has placed on our path, so that a year that in many ways shook and rattled us, was also a year of growth and new beginnings.

Kindergarten: After the building work at the church by the congregation on a large classroom, veranda, and playground, also to be used by the St Martin’s Village Kindergarten, was finished in February, the Kindergarten could start operating. The slow start with the children from SMV and a few from the congregation came to an abrupt end with the first hard lockdown in March. Since July operations resumed and by the end of the year, the group of children had grown to 15, with a couple of new registrations for next year. They are cared for and taught by experienced teachers Irma Nel and Sheina Stoop, who are assisted by Xolisiwe Dube and the carers from SMV. We are grateful that two of the children from SMV, after having been placed in long-term foster families in our area, can continue to attend the Kindergarten, staying part of and growing in the Village.

Enterprises: The lockdown presented us with a need – people losing their jobs on a massive scale – and opportunity – time – to ramp up the community enterprises, gardening, egg production, piggery, compost, and firewood production. Help also came in the person of a local businessman, who has invested substantial know-how, time, capital, and determination in growing these enterprises in service of the community. Products are supplied to restaurants, community members who pick them up from the farm and sold at local farmer’s markets. Five people are now employed in these operations. Two Farming God’s Way courses were also offered (one in February and one in October) where between 20 and 30 people at a time learned to use the gifts and resources God has given them to provide a livelihood to their families and communities.

Temporary Safe Care: The heart of the village remains to care for up to six abandoned or vulnerable babies up to such a time where they can be placed in long-term foster/adoptive families or returned to their families of origin. This care is provided by Thekla Böhmer and three employed carers and a housekeeper. The lockdown provided for a relatively stable environment for those children who had been placed with Thekla, but also caused considerable administrative headaches. It saw the social work normally supposed to be done by the Department of Social Development come to a complete halt. It has only resumed partly (see also Dear Minister Zulu, all they want for Christmas is a fa… (dailymaverick.co.za)). The last three years saw 24 newborns, 8 toddlers, and 15 young children being cared for. To help us continue with this work, please consider becoming a regular sponsor of this project. (See sponsorship)

It takes a village to raise a child – Thank You for being part of that village!