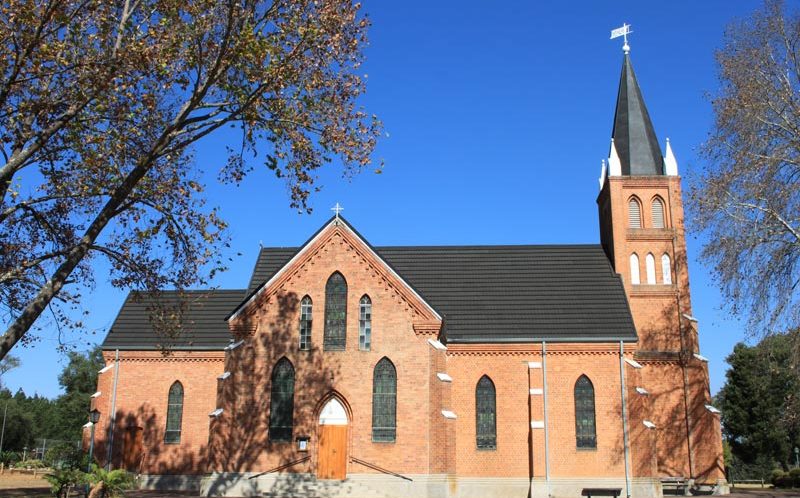 Our church owes its existence to the destruction of the church, hall, school and pastor’s house of the Bergen parish during the 2nd Boer War (1899-1902). A farmer offered a part of his farm Meyershoop as a donation for the new church site, which was closer to the town Piet Retief. Thereupon it was decided at a meeting on December 8, 1902, to establish the church Wittenberg there. A chapel with two adjoining rooms was immediately built, which were to serve as living quarters for Pastor H. C. Johannes. In 1917 a building fund was established and in 1920 the building commission was commissioned to start building the church. The consecration of the finished building took place on 16 December 1921. Already in 1937 a wing to the south had to be added due to lack of space. In 1967 the north wing was added, which gave the church building a symmetry.

Since its inception the Wittenberg congregation has been blessed with services of Word and Sacrament, with pastoral care of various committed and faithful pastors and members being very active and involved in the life of the church. The congregation has played an important part in the community through involvement of its members, through a school on its premises, and direct and accompanied mission work which led to the establishment and support of further congregations of the FELSISA and the LCSA.

Currently weekly on every Sunday a Confession and Absolution Services is offered at 8.30 am, thereafter a main Divine Services at 9am and after a nice Coffee break in our comfortable church hall a Teaching Service. During Lent and over festive Seasons additional Divine Services are held.

The congregation is known for its great interest in music, having been blessed with a singing choir and a brass band during all the years of its existence. A beautiful new organ was installed end of November 2019 which assists the congregation in worship.

We would love to welcome you at our church and visit with you. Feel free to contact our pastor or the chairmen of the congregation.