FELSISA / FELSISA News / The Illustrator of the Reformation: LUCAS CRANACH 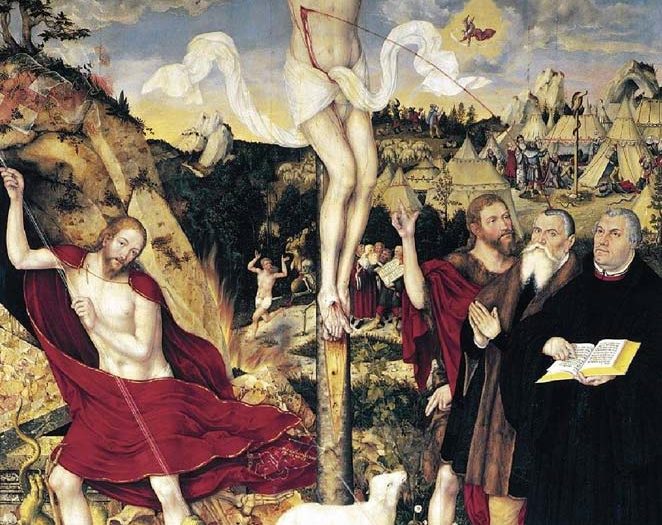 The painting on the second last page (p. 19) is by Lucas Cranach the Younger.

There are many aspects to this particular painting. I remember travelling to Weimar many years ago and standing in front of this altar in absolute amazement at the intricate details on show. There is just so much happening, all in this one painting! In the centre we see Christ crucified; to his left, there are three characters standing under the cross – on the right we see Martin Luther, open bible in hand; next to him is Lucas Cranach the Elder, the father of the artist, who had just passed away in 1553; and next to him stands John the Baptist, as ever with a finger pointing to Christ, saying, “Behold the Lamb of God!” To the left of the cross is a portrayal of the resurrected Christ, slaying the dragon lying at his feet. And in the background, we see various scenes from the Old Testament… One could spend hours looking at this picture, and still not see and grasp everything.

I recall showing this picture to a class of Confirmands some years back. Of all the many details in the painting that could have attracted the children’s attention, this one got the most reaction: