FELSISA / Our Confession / Sacraments / The Cup of Thanksgiving 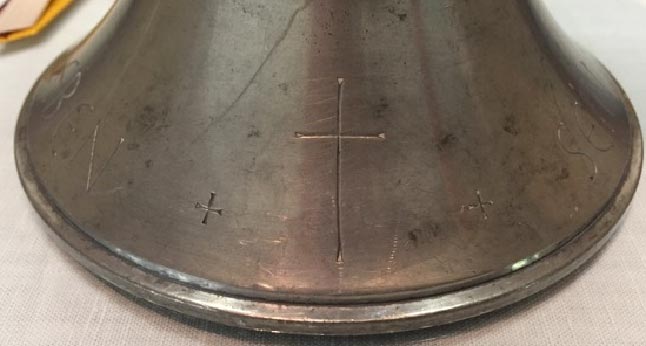 We have a particularly nice set of communion vessels at Our Saviour. The stamp at the bottom tells us that they were made in 1937 in Germany. No one knows exactly how they came here, but my research has led me to believe that they were a gift from the SELK congregation in Homberg (Efze). Incidentally, we have a smaller replica set, exactly the same as the one we use in church, which is used for Holy Communion for the services in Ballito, at the Old Age Home, and also for Communion of the sick and homebound.

Coming out of Germany, the Communion vessels are inscribed with German texts. The Ciborium (Bread Box) – also called the Pyx or Pyxis – has the inscription from John 6:35, “Ich bin das Brot des Lebens” – “I am the bread of life.” Christ identifying Himself as the bread of life, giving Himself up for His flock, becoming the one who feeds His people with the spiritual nourishment needed for life eternal!

And the Paten (where the wafers are placed on before being distributed) is inscribed with the words from 2. Corinthians 5:17, “Ist jemand in Christo so ist er eine neue Kreatur” – “If anyone is in Christ, he is a new creation.” Nowhere else are we nearer to Christ, more connected to him, than in Holy Communion – and so, St. Paul says, we become a new creation.

The Chalice has a very interesting inscription, and that’s what I want to concentrate on. Its inscription is based on Philippians 1: “Sein Tod ist unser Leben” – “His death is our life.”

Now as you look at the chalice head-on, you only really get to see one word at a time. You have to turn the chalice to see the next word in the sentence. And so when the church elders hand the chalice to me as I receive communion on Sundays, I always look to see which word is facing me. It’s one of five, and each one of them has deep theology behind it! Each one of them is striking in its own right!

“Sein” – “His”! His, not mine! His glory, His righteousness, His work of justification. The first word of this sentence makes it clear about who this is all about – it’s all about Christ. It’s all about what He did for me.

And what did He do? Well, He died for me. “Tod” – “Death.” When this word faces me, a shiver goes down my spine. The significance of the situation, the seriousness, it strikes me. Christ died for me! I can drink from this chalice because a death occurred! That’s how far Christ went out of love for me.

And so as I kneel there, in a certain way, another death occurs – the death of my Old Adam, dying to sin, and living to Christ! And, what’s more, I’m reminded of my own death, something that will come sooner or later. But by facing that reality, by looking it in the eye, and by receiving the antidote, I live! And I’m comforted, despite the solemnity, despite the tragedy of the situation.

“Ist” – “Is.” I can’t help but think of Martin Luther, sitting up in the castle in Marburg (Germany) in 1529, discussing the Lutheran position on Holy Communion with Zwingli and the Calvinists (i.e. with Reformed theologians). The big difference was, that the Calvinists weren’t prepared to accept that in Holy Communion it really was Christ’s body and blood present. They couldn’t understand how that was possible, so they changed the wording. They took the words of Jesus to mean, “This represents my body, this represents my blood.”

But Luther would have none of it. Jesus had said, “This is my body, this is my blood.” And He would remain true to that. Just as someone who is hungry and thirsty will never be satisfied by a mere picture of a glass of water and a piece of bread (he needs the real thing!), so we too don’t need symbolic nourishment, but real food. The real and true body and blood of Christ!

And so, as the discussion went on, and the Calvinists just wouldn’t let go of their position, Luther pulled back the table cloth, to reveal the Latin word “est” – “is”, which he had written there in chalk beforehand. Est – Ist – Is: This is the body and blood of our lord. And in the same way, His death IS our life, there are no two ways about that. And as I kneel there I’m assured in knowing that what is happening here IS true, IS real, IS for me!

And, what’s more, it’s an objective truth that this really is Christ’s body and blood, even if I don’t feel it, even if I’m down and emotionally in a bad place as I kneel here in front. It IS true, regardless of my feelings. It doesn’t depend on me. It depends on Christ! That is a great comfort!

I’m a part of the body of Christ, and as such, this gift of life not only makes me look up to heaven, but also across to my neighbour. Do I love him as I love myself? Am I looking to the welfare of others? Am I mindful of the needs of my fellow congregants?

The final word: “Leben” – “Life.” I receive not just life eternal, I receive life now. I can breathe because my sins are forgiven. Death, eternal death, is on the other side of the chalice, turned away from me, just as Christ took the death I had to suffer upon Himself. And even as I experience death here on earth, I know that it is not forever. It is but a short time, a brief interlude before Christ calls us back to life on the last day. I receive life as I drink from this cup – can there be a greater gift?

And I’m reassured in the knowledge that because of the cross of Jesus, I have life eternal – despite everything around me pointing to death, destruction and decay. I am partaking in that life when I kneel here in front to receive the body and blood of Christ. “Sein Tod ist unser leben” – “His death is our life.”