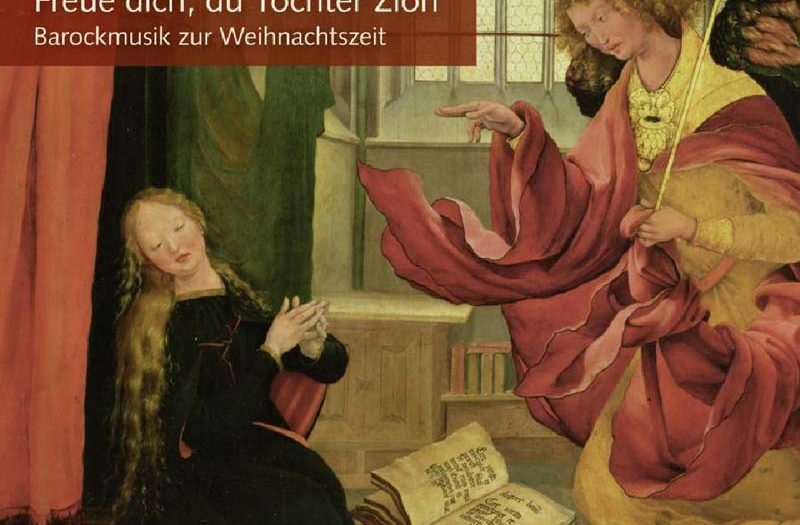 It’s almost Christmas! And a big part of Christmas is listening to Christmas music – in all manner of styles, from pop (Boney M.) to classical (Bach’s Christmas Oratorio).

But in between these two extremes, there is quite a large relatively unknown repertoire just waiting to be discovered. I would like to present to you three recordings of Christmas music that mean a lot to me personally, and that I can recommend wholeheartedly: „Freue dich, du Tochter Zion“ (Vocalensemble Rastatt / Les Favorites / Conductor: Holger Speck / Carus Verlag, 2013)

The Vocalensemble Rastatt is a professional ensemble made up of young singers from all over Germany. On this recording, they perform Christmas music by baroque composers such as Andreas Hammerschmidt, Johannes Eccard, Johann Hermann Schein, and Johann Rosenmüller. I was privileged enough to be a member of this ensemble from 2008 till 2012, and I have fond memories of the hours of passionate music-making that characterises this world-class formation. (Unfortunately, I was no longer in Germany when this recording was made in 2013).

Besides, well-known pieces such as “Übers Gebirg Maria geht” (performed here at a fair lick!), some pieces on this disc are world premiere recordings, such as the motet “Also hat Gott die Welt geliebet” by Johann Rosenmüller.

My personal favourite is the cantata “Willkommen, süßer Bräutigam” by Vincent Lübeck, a piece that I have known since early childhood. Never before has this piece been recorded quite so beautifully! Special mention must be made of the soprano soloists Maria Bernius and Felicitas Erb, who sing with a wonderful clarity of diction and an intimacy befitting of the text. The singers are ably accompanied by the baroque ensemble “Les Favorites,” performing on historical instruments.

Conductor Holger Speck places a great emphasis on the text throughout this recording, ultimately creating a CD that doesn’t only impress by its beauty of sound, but also by deep and meaningful interpretations, that invite the listener to take some time out of their busy life-style and meditate on the true meaning of Christmas.

This CD was released as Volume 10 of the complete recordings of the works of Heinrich Schütz (1585 – 1672). Performed by the Dresden Chamber Choir under the direction of Hans-Christoph Rademann, this recording features a number of Advent and Christmas motets, as well as one of the most famous pieces by Schütz: his “Weih-nachtshistorie,” in which the account of Christ’s birth is set to music in a most wonderful and befitting way.

The Dresden Chamber Choir sings with exemplary clarity and diction, exquisitely accompanied by the Dresden Baroque Orchestra, performing on historical instruments as Heinrich Schütz himself would have known them.

The highlight of this recording is, however, the tenor Georg Poplutz, who as “Evangelist” has the important function of reciting the text from Luke chapter 2. With a clear and flawless voice, he sings, or rather tells the story of Christ’s birth in such a gripping fashion, that one might see the actual scenes playing out before the mind’s eye.

I must apologise if I start waxing lyrical about the qualities of this recording! But to me personally, this is one of the best CDs ever produced. Indeed there are recordings that set benchmarks, and remain bestsellers even after many years. The “Mass for Christmas Morning” by Paul McCreesh and his Gabrieli Consort is one of those. Released in 1994, is has been reissued a number of times and still remains a highlight in the catalogue to this day!

I must confess that I have never before heard such an awe-inspiring sound! Together with the Gabrieli Consort and the choirs of Roskilde Cathedral in Denmark (supplemented by local amateur choirs), McCreesh reconstructed a Lutheran Christmas Service as it may have been celebrated around the year 1620. The polychoral compositions (ie. pieces written for spatially separate choirs) of the German composer Michael Praetorius (1571 – 1621) form the backbone of this Christmas service. The entire liturgy is sung – even the liturgy of Holy Communion! And yes, not much has changed over the years. You might even recognise elements of the Lutheran liturgy of our day and age on this recording.

It is almost impossible to identify highlights – everything on this disc is of exquisite beauty. But the final hymn “In dulci jubilo” really takes things to the next level! It seems as though the heavens open up: “Eia wär’n wir da! O that we were there!”

Admittedly, these are all recordings of baroque music. Maybe I am slightly biased… But still, it doesn’t always have to be “Silent Night” or “Little drummer boy” or even Bach’s “Christmas Oratorio” for that matter. A glance beyond the standard repertoire may be quite an enriching experience sometimes.

(The recordings can be purchased via Amazon or iTunes).