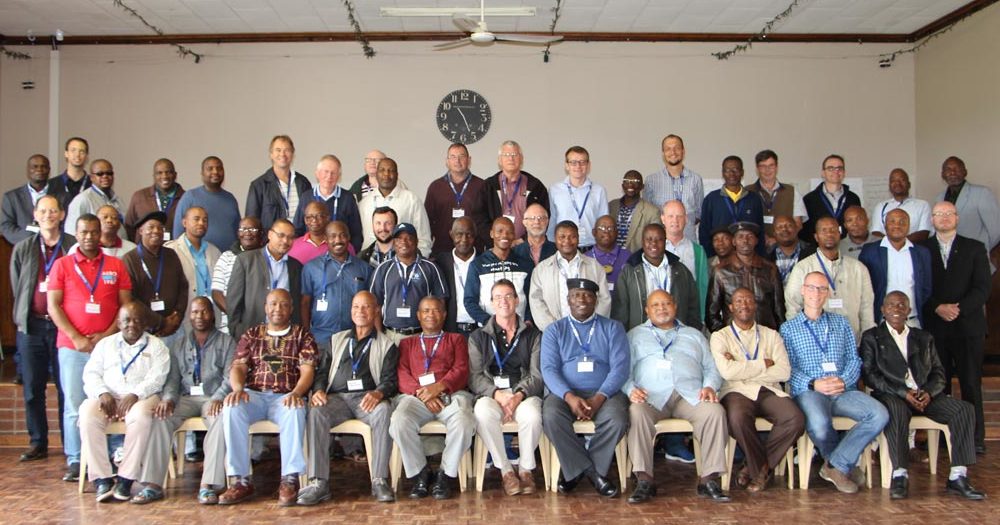 Those familiar with the history of the FELSISA will know that in the distant past, joint conferences were regularly held between pastors and missionaries of the FELSISA and the MLC (Mission of Lutheran Churches, or Bleckmar Mission), and that such meetings occasionally also included clergy from the LCSA.

In the course of time, however, such events were held less and less frequently. Even though meetings and encounters have been held more regularly at regional levels between clergy from the three partner organisations, the last joint synodical pastors’ conference between the LCSA and the FELSISA took place more than 25 years ago. It is, therefore, a very welcome development that a meeting took place at this level recently – not a joint pastors’ conference as such, but more of a joint discussion on the topic of reconciliation. It was organised following the FELSISA’s synodical convention of 2016, where the so-called “Trilateral Commission on Apartheid” (chaired by Professor Dr Werner Klän (SELK) and constituted of representatives of the MLC, the FELSISA, and the LCSA) presented its findings and called for ongoing encounters and closer cooperation between the FELSISA and the LCSA. Due to the wealth of festivals and anniversaries held in 2017, the sister churches did not manage to find a suitable date for meeting last year, until a workable timeframe presented itself for an initial round of discussions at the beginning of January 2018. The synodical leadership of both church bodies recognised the value of and need for such a discussion and therefore made the most of the opportunity.

Bishops Maragelo and Reinstorf planned the gathering together. It was believed that it would be good for such talks to be mediated by external facilitators familiar with South African history and circumstances, in order to avoid any suspicion of partiality on the part of those leading the talks and to make it possible for the bishops to participate in the discussions in a personal capacity. The organisers managed to secure the services of two proven facilitators in the local context, Dr Kobus Gerber and Rev. Sikawu Makubalo. Their task was not to provide the content of the discussions, theological or otherwise, but rather to enable the gathered clergymen and co-workers from the two confessional Lutheran sister churches to enter into discussions with one another and judiciously to accompany the course of the talks. In this, they succeeded very well. The facilitators provided very little formalised structure for the discussion and intentionally left the outcome of the talks open.

A total of 51 participants from both churches attended and participated actively over the 3 days of the exchange. Opportunity was also given for participants to get to know one another via personal interaction. The open framework and the confidential atmosphere made it possible for discussion partners to communicate openly their convictions of faith, as well as personal expectations, hopes, fears, values, experiences, and commonalities. The participants were reminded of the shared basis of faith and the common confession, and together they listened to God’s Word, sang hymns, and prayed. After all, both synods originally came into being as a result of missionary efforts by the confessional Lutheran Church of the 19th and 20th centuries, and they also remained connected with one another by way of mission (especially in the form of the Mission of Lutheran Churches, i.e. in partnership with the SELK, the German sister church). From the beginning, the sister churches were united in pulpit and communion fellowship, but often gave very little visible expression to this fellowship in joint divine services and Holy Communion. During the discussions in Wartburg, participants from each synod had the opportunity to gather in groups and then to report back on their view of the course of the history of the churches and their interaction, and to reflect on it in the medium of open exchange. The atmosphere of trust made it possible to address issues of joy and suffering with one another, to talk about the present and the past, and jointly to identify topics requiring urgent attention.

At the end of the gathering, the participants jointly formulated a memorandum of understanding (MOU) which recorded both the course and the emphases of the discussions in broad terms. It should be added that this MOU was not formulated and signed in the name or on the instruction of the two sister churches, but simply by those present, who did so in their personal capacity. The intention behind it was not to formulate the MOU as the final result of conversations surrounding issues of reconciliation or cooperation, but rather to see it as a draft statement for and as a first step on the way towards a more visible expression of the already existing fellowship. These initial, yet profound conversations certainly give rise to hope in this regard. The gathered clergymen from the two church bodies concluded this round of talks by asking the Lord in prayer for His blessings on future endeavours in this regard. With gratitude to the one Lord of the church, the two facilitators, the organizers, those who prepared the food, the hosting congregations (Kirchdorf/Our Saviour), and fellow participants, the meeting ended on a fitting note with Scripture readings and prayer.

A photo of the participants of the joint gathering can be found on the second to last page.